Abstract—Notions of a fractional method of control in nanotechnology are presented and a key stage of the method is described that is related to determining the shape and dimensions of nanoobjects based on their scanning electron microscopy images obtained at various convergence angles of the electron probe.

The properties of nanoobjects are determined by the “size–structure–faceting” triad, which must be controlled both in view of their functional characteristics [1] and with respect to their compatibility with the biosphere [2]. There are no nanotechnologies capable of obtaining arrays of nanoobjects of the same size and (in view of the relationships between size, structure, and faceting) with the same set of structural[1]morphological characteristics [3–7]. Uncontrolled objects negatively influence the operation of devices and even can be dangerous, since they cause disturbances of metabolism in living organisms [1, 2]. The final checking must be based on separating fractions with different structures and morphologies, while the ecological safety makes it necessary to identify fractions that account for 10–5–10–7 of the total mass of objects [4–7]. Nanotechnologies capable of ensuring optimization of the properties of nanoobjects and being safe for the biosphere will only be possible provided that the problem of final checking will be solved [2, 4–7], but the control over shape and structure of nanoparticles can only be provided by microscopic methods. Of these, only the scanning electron microscopy (SEM)’s capable of monitoring arrays with the number of nanoobjects >=106. Under fixed conditions of formation of SEM images, their dimensions, shapes, and intensity distributions are determined by the parameters of imaged objects, so that the fractional control can be based on the distribution of images with close characteristics into groups. In order to separate fractions, it is necessary to determine reasons for the variation of these characteristics, but SEM has no methods for the characterization of objects with a priori unknown habits and composition variations [8, 9]. Thus, it is necessary to teach SEM to check for the shape and size of nanoobjects.

The size of a focused SEM probe now approaches ~1.0 nm, but even these SEM instruments cannot solve the problem of characterizing nanoobjects because we can only determine the dimensions of and image corresponding to a projection of the object, whereas neither its height nor the heights of details are determined, and its shape and crystallographic habit remain unknown. The problem of determining the habits of nanoobjects also cannot be solved using stereo imaging techniques, since changes in the images caused by the aforementioned factors and those related to variations of projections are comparable [8. 9]. SEM employs probes with convergence angles χ≈10–3 rad, which implies that the depth of focus (DOF) is ≥0.5 µm [8]. Thus, the DOF is greater than the object height, and the size of the probe moving over the object surface remains virtually unchanged. However, for .. 10–1 rad, the DOF drops to .10 nm, so that it becomes smaller than the object height. Then, the probe size varies during motion over the surface of an object even with a height of about 10 nm, that is, the probe exhibits defocusing. This defocusing (in contrast to the “instrumental” defocusing that is caused by an inadequate excitation of the object) may be called “habital.” Below, the situation in which the DOF is greater than the object height is called sufficient depth of focus (SDOF), while the case where the DOF is smaller than the object height is called insufficient depth of focus (IDOF).

The action of an object with the probe, whose size varies during the motion over the object surface, can be characterized by the “action surface” and, in a certain section, by the “action curve.” In this study, the effect of habital defocusing is treated based on the notion of the action curve, but all laws remain also valid for the action surface, that is, in application to 3D intensity distributions. The action curve I. is described by the following expression [10]:

where δ = √2σ is the probe half-radius, which can be written in a linear approximation as

σ is the mean square deviation, xcis the coordinate of the probe center, J is the total probe intensity, z is the distance from an output plane of the objective lens to a point on the object surface, fis the focal distance, σ0 is the radius of the probe cross section by the focal plane, R is the radius of the output aperture of the objective lens, |z– f| is the object height, and Xis the integration domain determined by the object length in the given direction. Due to the dependence of . on |z– f|, the action curve reflects the object shape. Since δ = 2 √2σ , all routines developed for the modeling of SEM images (Joy’s PC Mote Carlo Programs, Casino Mote Carlo Program, SEMLP, etc.) are applicable to operations with the action curve.

Information about the action curve can extracted from SEM images obtained under IDOF conditions. A difference I_ between the action curves corresponding to different angles of probe convergence is expressed as follows:

Figures 1 and 2 illustrate the procedure of determination of the object shape. By virtue of the laws of focused SDOF images [8, 9], the characteristics of a 3D SDOF image most exactly reflect the shape and dimensions of the object. This image can be used as an initial model for reconstructing the true parameters of an object. 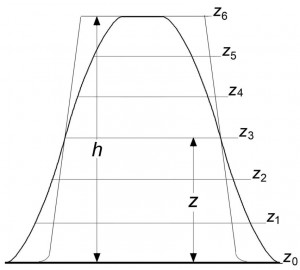 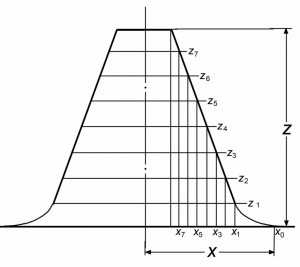 The following sequence of stages is proposed for determining true parameters of an object using its 3D model image:

(i) Construct a SEM image of a model with a composition, corresponding to that of the object, under conditions identical to those used for the formation of the object image [8].

(ii) Fit the model image to the experimental image by varying the object dimensions.

(iii) Accept the dimensions for which the model image coincides with the true image, as the object dimensions.

The final stage of the proposed approach to object identification is identical to approaches, in which the object dimensions are determined by fitting images of a measure or a putative reference object to an experimental image [11]. However, the proposed approach is not based on assumptions concerning the object habit, but rather on a reconstructed 3D image that objectively reflects the habit. This approach is applicable to objects of any, even most complicated shapes, and it eliminates errors caused by the mismatch between shapes of a measure or a putative reference object and real objects [8, 9]. In combination with the method of electron backscatter diffraction [12], the proposed approach makes it possible to control the structure and morphology of objects using images of each group.

The control of arrays (after establishing relations between the characteristics of objects and their images) reduces to recognizing images of various types on SEM micrographs. The rate of this control approaches that of the interstage control in microelectronics. Thus, it will meet the requirements of both final checking and interstage control. Presently, most technical problems encountered is implementation of the proposed approach are soled, in particular, spherical aberration controllers [13], devices controlling the probe convergence angle [14], and systems for the comparison of images corresponding to different probe convergence angles [13] have been developed. For implementation of the proposed method, it is only necessary to equip a scanning electron microscope with a mechanism controlling the matching of a focusing plane with ZOHP and its subsequent shifts to preset positions. Attaching a device of the type used in scanning probe microscopy [15], where a point on a cantilever serves as a probe and a reflected laser beam is used in the detection system, is a technically solvable task.