Principles of Nanomaterial Control for the Development of Safety Standards

Abstract — The general principles of ecological safety control over nanomaterials are formulated. Specific features of this control for materials in the form of solid solutions are illustrated by the laws of nanostructuring in fluorite-like CayLa1-yF3-y and LaxCa1-xF2+x systems.

Commercial technological control must, on one hand, ensure high quality of the products and, on the other hand, decrease the technological risk for the environment, primarily for the living nature (ecological control). However, publications devoted to the technology of nanomaterials and even the patent documentation establishing rules of the commercial control over their production consider only the issues pertaining to the quality control (see, e.g., [1]). Ecological control is based on the safety standards (e.g., maximum permissible concentrations for the production of chemicals), but the principles of such standards for nanotechnologies are now only at the beginning of discussion [2]. For this reason, in attempting to formulate the principles of ecological control, we proceed from three factors: (i) mechanisms determining the reactions to contacts between substances on the molecular level; (ii) specific thermodynamics of nanocrystals; and (iii) technological features stipulating margins for the product parameters.

The reactions of substances to contacts between each other are controlled by their surface functionality, that is, by the ability to adsorb and to control reactions in adsorbed layers [3]. The surface functionality is determined by the electrostatic potential, which depends on the structural and morphological characteristics, including the atomic structure, defect structure, and indices of the contact planes. For example, in diamond crystals this potential is positive for {001} and negative for {111} planes [4]. The same molecule can differently react to contacts with a given substance, depending on the structure and morphology of the contact surface. The contribution of the surface energy to the chemical potential of a crystal increases with decreasing crystal dimensions. For nanodimensional particles (with a characteristic size of d<100 nm), the role of the surface energy may become comparable with that of the volume energy. For this reason, the equilibrium structure and morphology of such particles can differ from those of the massive samples. For example, a decrease in the crystal size leads to a shift of the phase equilibrium between rutil and anatase in TiO2 crystals toward anatase [3]. The equilibrium habit of TiN crystals with decreasing size exhibits transformation via several intermediate forms from octaherdral ({111} habit) to hexahedral ({001} habit) [5]. The passage to a nanoscale changes the surface functionality both quantitatively and qualitatively. The variation of dimensions in the nanometer range provides a means of control over the surface functionality of materials.

There are three reasons for which the ecological safety cannot be based on the control of a single parameter (e.g., the total surface area) [2]. First, the structural-morphological characteristics in the nanodomain are thermodynamically related and, hence, a change in one of them leads to the corresponding variation of the other. Note that the habit cannot be characterized entirely by the exterior shape and should be determined with allowance for the crystallography of faceting. Second, these characteristics are functionally related: crystals with the same dimensions and phase compositions but different habits possess different functionalities and vice versa. Third, these characteristics are related methodologically: for example, the indexing of crystal faces cannot be performed without determining their orientations with respect to crystallographic axes. Therefore, the ecological control must be based upon a threefold, inseparable combination of three characteristics: size, phase, and habit. The necessity of triple control is also related to the fact that the relationships between structural-morphological characteristics possess a complicated character and depend on some other factors determining the surface energy, for example, on the presence of surfactants and on the impurity composition in a crystal.

Under real commercial conditions, it is impossible to obtain particles of the same size. Batches, in which the dimensions of 90–95% nanoparticles differ by no more than 10% are considered as monodisperse, although the dimensions of remaining fractions can vary from 1 to 100 nm [1]. However, the minor fractions may contain the particles with different structural-morphological forms. The material on the whole can be nontoxic, but the minor fractions can affect the metabolism, with the outcome manifested several dozen years after. Especially dangerous are the batches of nanoparticles with the characteristic sizes below 50 nm, in which several structural-morphological forms can exist in the 1–50 nm range. For example, ZrO2 has modifications with monoclinic (m-ZrO2) and tetragonal (t-ZrO2) structures, each one existing in hexahedral, octahedral, dipyramidal, and intermediate forms. For this reason, even 10% size variations in the 3–30 nm interval for ZrO2 nanoparticles can lead to principal changes in their surface functionalities [6]. The ecological control must be based upon (i) the separation of fractions with identical and/or close structural-morphological characteristics and (ii) the subsequent control operations (including both in vitro and in vivo procedures) carried out separately on each particular fraction.

The structural-morphological characteristics of nanoparticles based on solid solutions can exhibit specific features, which are related to the laws precipitation as, fore example, in the CaF2 – LaF2 system. The precipitates appear in CayLa1-yF3-y during the synthesis and in LaxCa1-xF2+x during the anealing (see Fig.1, I-V).[1] 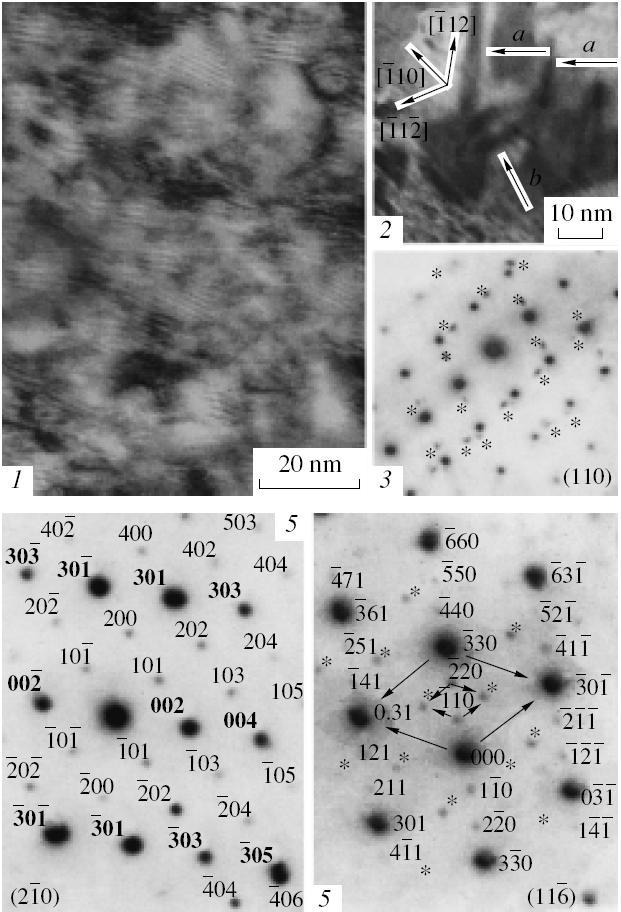 Fig. 1. (I–III) Electron micrographs and microdiffraction patterns of cubic LaxCa1-xF2+x in the [110] projection: (I) objects with oscillating contrast represent the images of twins; (II) a precipitate with developed {111} faces and less developed {001} faces and the related twins with the localization planes (a)

; (III) matrix and twin (indicated by asterisks) reflections in the absence of reflections due to precipitates; (IV–V) electron microdiffraction patterns for CayLa1-yF3-y: (IV)

, etc. in the trigonal lattice) in the [100] direction; the ordering direction <101> implies the presence of boundaries with <101> displacements; (V)

projection; re ections indicated by asterisks are only related to superstructural re ections and not indexed in the lattice of CayLa1-yF3-y; arrows indicate the directions of <301> displacements; the distances between superstructural and inconsistent re ections correspond to ~1.9 Å-1

In LaxCa1-xF2+x, the precipitates have a distorted tetragonal CaF2 lattice with an ordered distribution of Ca2+ and La3+ ions over positions in the cation sublattice [7], while in c they have a distorted trigonal LaF3 lattice with one Ca2+ and two La3+ ions alternating in a regular manner along the [001], [101], and [102] directions (Fig. 1(II)), which implies the LaxCa1-xF2+x composition [8]. No ordered phases are known in the CaF2 – LaF2 system and, according to its phase diagram, decomposition of a supersaturated solid solution based on CaF2 must be accompanied by the formation of precipitates with a LaF2 structure, while the decomposition of a LaF3-based solid solution must yield precipitates with a CaF2 structure (the content of CaF2 in LaF3-based solutions must not exceed 3 mol %, which disagrees with the La2CaF2 composition) [9]. The precipitates in LaxCa1-xF2+x exhibit a cubooctahedral habit with predominant development of {111} faces (Fig. 1(II)), which is contradicts the laws of precipitate faceting in the cubic matrix [10]. This habit reflects features of the energy state of the precipitate/matrix interface, which are related to characteristic distortions of the cubic lattice during CuAu type ordering. The dimensions of precipitates are also determined by their structures [7], so that the structure and morphology of precipitates obey the laws established for isolated nanocrystals. The structuring reflects the tendency toward minimization of the surface energy, and this rule holds irrespective of whether this surface is a free boundary of the crystal or an interface between two solid phases.

The relaxation of stresses around the precipitates in LaxCa1-xF2+x gives rise to twinning. The twins cover the entire field of view (Fig. 1(I)), which is indicative of a very high density of the precipitates. However, the absence of superstructural reflections on the electron diffraction patterns of volumes about 0.02 µm3 (Fig. 1(III)) corresponds to an almost complete absence of the images of precipitates (which can only be guessed) on the electron micrographs (Fig. 1(I)). The electron diffraction patterns show evidence of an order averaged over the scattering region, and the absence of the manifestations of precipitation can be related to the presence of antiphase domains appearing due to a stochastic character of the ordering process. However, the domain structure of particles with dimensions below 20 nm implies an increase in the surface energy and, at first glance, contradicts the principle of nanostructuring, thus requiring additional verification.

In the case of deviations from exact projections, the domain structure leads to the appearance of satellites near matrix reflections [8], which was also observed for a cubic LaxCa1-xF2+x [11]. However, the satellites can also reflect the process of twinning. In order to unambiguously confirm the existence of a domain structure, we have studied the features of electron diffraction from La2CaF2 precipitates with a trigonal lattice. The transition from one domain to another (during the sequential scattering on domains) is related to a phase shift that depends on the vector of displacement at the domain boundaries. The ordered La2CaF2 phase contains boundaries with <101> shifts, and the sequential diffraction on various domains must lead to the appearance of reflections with noninteger indices (inconsistent reflections) [8]. In order to reveal the domains in precipitates, it is convenient to use the

projection, for which the

direction coincides with the rows of superstructural reflections (Fig. 1(V)). The <101> directions are projected in the

plane on the <301> directions. For this reason, the inconsistent reflections caused by the <101> shifts must be displaced relative to the superstructural reflections in the <301> direction by distances |g101| cos σ, where σ = 24.8° is the angle between the [301] and [101] directions. In CayLa1-yF3-y, three types of domains are possible in which (i) Ca2+ and La3+ ions in the cation sublattice alternate as LaLaCa, LaCaLa, and CaLaLa and (ii) the displacement vectors on the antiphase boundaries take the values <101> and

, and (iii) two series of parallel inconsistent reflections appear that are symmetric with respect to

The degree of ordering in LaxCa1-xF2+x varies from nearly complete disorder to almost ideal La2CaF2, which implies that La2CaF2 (as well as an ordered phase with a cubic lattice) [8, 12] represents an ordered state of the CaF2 – LaF3 solid solution rather than a compound. The electron diffraction pattern in Fig. 1(II)b displays two series of inconsistent reflections, which are situated on both sides and are symmetric with respect to [110]. The inconsistent reflections are spaced from the reflections in the <301> direction by a distance of
|g101| cos σ = 2.1 Å-1 x cos24.8° = 1.9 Å-1. This pattern obeys the laws indicated above. La2CaF2 is not only ordered, but it also contains antiphase domains. Both ordering and the formation of antiphase domains agree with the notions of nanocrystal thermodynamics. Indeed, the ordering provides regular structure of the surface and ensures minimization of the surface energy, while the domain structure is related to the spontaneous appearance of the ordering centers. The energy of antiphase boundaries is not large and almost does not influence the diffusion transfer from one domain to another. Under usual conditions, this transfer leads to the motion of domain boundaries and the mutual absorption of domains. However, the elastic interaction of antiphase boundaries with the surface in nanocrystals can stabilize early stages of the domain structure. The ordering, its degree, and the presence of antiphase domains, must significantly influence the functionality of nanoparticles based on solid solutions. These parameters must be included into the list of obligatory structural-morphological characteristics controlled for such nanoparticles, especially in connection with the latent character of the diffraction manifestations of ordering, which is related to the presence of antiphase domains.

[1] The samples of CayLa1-yF3-y for this study were kindly provided by B.K.Sobolev (Institute of Crystallography, Russian Academy of Sciences, Moscow)